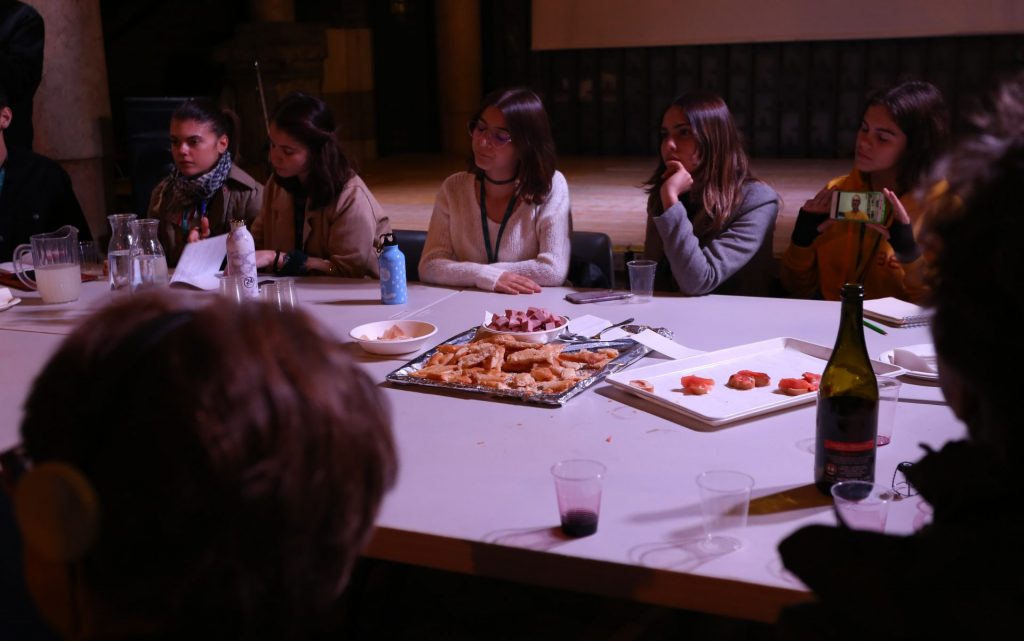 A Production Review by Anna Moberg from the Norwegian TAG

Sex can be bitter, and so can companionship too. Sometimes trying to form your identity can be the most bitter thing of all. Your dreams don’t always come true, and when they finally do they can have a bittersweet ending. Nothing is granted and not everything is easy – but all of it is worth it, so worth it.

The performance Persona, directed by Matteo Spiazzi, reflects upon these feelings. It takes us through stories and moments filled with humor, but also sadness and loneliness. Persona is a performance about four people living together in one flat, and all the irritation, love and embarrassing moments that that can bring. The performance is non-verbal and the actors are all wearing masks. The story is accompanied with loud music, filling the room and enhancing the emotions portrayed on stage.

I was very impressed by how much expression there could be in a faceless non-verbal performance. Even though no one said anything, the actors body language told me everything I had to know. The actors were extremely skillful at communicating their story to us as an audience, without having to say a single word. The element of wearing masks was, maybe for the first time in my lifetime of watching Performing Arts productions, very cool! The masks were quite distorted and a little grotesque but I found it very aesthetically pleasing.

As the performance went on, every one of the characters had their moment of showing their “true face” – and they took their mask off for a little while. Attached to the masks there were wigs as well, so it was very surprising to see that the person underneath maybe had a completely different head of hair, as well as a much more human face. The contrast between the mask and the face underneath highlighted how big a moment it was when someone really showed their “true face”.

The performance is quite slow paced but this is not necessarily a bad thing. To me it seemed important to spend the time that they did, so that the audience would have time to understand the story fully. Still, I think the performance could have been 10-15 minutes shorter.

Nevertheless, Persona is a really touching and well performed piece of Art. I would recommend it to everyone from age 13+. Go see it!